The Child of Wales Awards, an event that celebrates the inspirational achievements of children across Wales, due to take place in the Celtic Manor on April 3, has been postponed because of concerns over Coronavirus (COVID-19).

Some 750 guests including a number of celebrities were due to attend the event hosted by Carol Vorderman MBE and Ian Gough. The organisers said that the difficult decision was taken in the best interests of the guests and the young award winners. A new date will be announced for the event once there is greater clarity over managing the Coronavirus.

Blanche Sainsbury, the founder of the event, said: “This was not an easy decision to take. We have been building momentum to this event for a very long time and there were many young people and their families looking forward to what was to be a very special evening.

“However, the health and wellbeing of our award winners and guests was always paramount. Given the crisis the country is facing and the uncertainty surrounding the spread of the virus and the risk it poses to some members of the population, we felt there was no real option but to postpone.

“We remain committed to delivering what will be a truly remarkable night later in the year. As things stand, we hope to be able to announce a new date by May/June with the expectation that the awards will now happen later in the year. I would also like to take this opportunity to thank the Celtic Manor and all the sponsors behind the awards for their support in moving the date to later in the year.”

The move coincided with an invitation to 10 Downing Street

The National Children of Wales Awards, an annual event that recognises the achievements and inspirational stories of children in Wales, has chosen St David’s Day to rebrand as the Child of Wales Awards (#iamachildofwales on twitter), a name its founders feel better represents its ethos and values.

The move also coincides with founder Blanche Sainsbury and many of the children honoured at the awards visiting 10 Downing Street to meet Prime Minister Boris Johnson on Thursday February 27, who listened to their inspirational stories and praised their courage, fortitude and hard work. 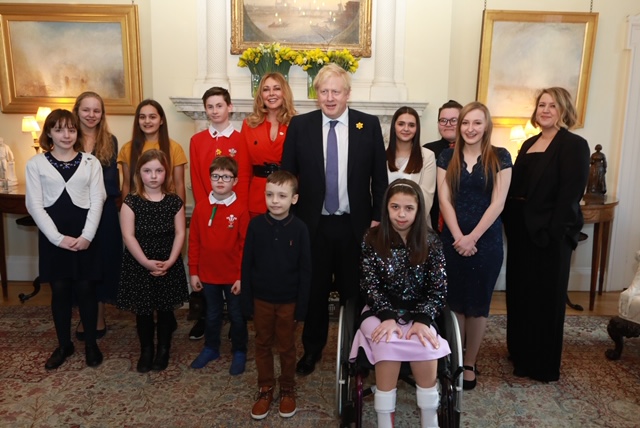 The Child of Wales Awards will take place at the Celtic Manor on April 3, 2020. It will recognise the achievements and inspirational stories of children and young people in categories including Child of Courage, Young Fundraiser, Young Sporting Hero, Community Champion and Young Performer.

The event will be presented by Carol Vorderman MBE and former Wales rugby player Ian Gough. Entertainment at the prestigious event will feature male voice choir Only Men Aloud, the winners of BBC talent show Last Choir Standing; Angelicus Celtis, a choir of Welsh schoolgirls who reached the semi-final of Britain’s Got Talent in 2017; and performances from Motionhouse, a world-class dance-circus production company.

The children who will be recognised on the night were selected from more than 200 nominees. The judging panel who faced the difficult task of selecting the winners included Carol Vorderman MBE, Ian Gough, Pepe Rahman (a winner from the Pride of Britain Awards), William and Pamela McNamara (directors of Bluestone National Park Resort), and representatives from the main sponsors of the awards Trade Centre Wales, BidFood and RedKite Solicitors.

All the winners will be invited to enjoy a VIP experience with their family at Bluestone National Park Resort. The awards aim to raise £100,000 at the event, which will be distributed to four charities in Wales that help children: The Teenage Cancer Trust, Dreams & Wishes, the National Society for the Prevention of Cruelty to Children (NSPCC) and the Bluestone Foundation.

Blanche Sainsbury, founder of the awards, said: “Ever since we first launched this event, we have been blown away by the interest that has been shown in it and the support from the business community in Wales. Being invited to meet the Prime Minister was a true honour and illustrated just how far we have come in terms of raising awareness about the event and it represented an amazing experience for all the children that attended that they will remember for the rest of their lives.

“We decided to use that event and the landmark of St David’s Day to also change the brand to the Child of Wales Awards, a name that we believe will enable us to take this event and everything it represents to the next level. Our intention is to recognise and pay tribute to the Children of Wales and we feel this event will only go from strength to strength in the future.”

Carol Vorderman said: “This truly remarkable event is now taking on a momentum of its own in terms of interest and support but, at its heart, its ethos is to celebrate the achievements, the talent and inspirational stories of the children of Wales.  It’s a happy and joyous first for Wales.”

The event has already attracted remarkable support from the business community with all award categories now sponsored for the evening. The event’s two main sponsors are The Trade Centre Wales, one of the largest and fastest growing used car companies in the UK, and Bidfood, one of the largest food wholesalers in the UK.